California Dreaming: On the trail of the Blue Whale

In the past I’ve been lucky to be the DTW (Discover the World) guide on the Trail of the Whale and California Blues trips - whale watching trips with a difference. On our own private charter, an experienced crew, the time, the freedom to move around, and the flexibility on where to go each day, it added up to the ultimate in whale watching. On all trips there are those who had been on a DTW trip before and some that have been on the same whale watching trip several times before! They knew what to expect whilst many new faces were recommended the trip by others. Some have saved hard and were a bit concerned it woudn’t live up to their expectations (and I’m sure others never booked in the first place since they assumed whale watching was ’unreliable’). Each trip is different, this is the wild after all, and there are always those quieter periods you get at sea between intense activity. But everyone went back having experienced a trip that surpassed all expectations and on every trip people are in tears over an experience that surpasses anything they’d ever imagined - they really did have a whale of a time!

Many whale watching trips around the World concentrate on ’reliable’ humpbacks, but on the California Blues trips the species encountered varies on each trip. Some days the activity is relatively quiet, on other days the range of encounters and species can be incredible and I liken the experience to a marine ’Serengeti’. Typically going out on three full day trips and three half day trips out of Monterey, California and with the upwelling, the Monterey peninsula, and Monterey Canyon (like a submerged Grand Canyon) it had to be one of the best places in the world to build up an impressive list of marine mammals.

The private charter were with Monterey Bay Whale Watch, run by Richard, the captain with great naturalist and birding skills, and Nancy, the Monterey Orca expert. The opening sequence the Orcas chasing the Grey Whale on the BBC epic The Blue Planet was filmed out of Monterey with them. On one trip with a pod of Risso’s Dolphins around us, Nancy had to talk to the BBC by mobile about some editing they were doing to the final footage!

Although the ultimate encounter is with a Blue Whale the stress is on the range of species and encounters. In 2003 we had an incredible number of Blue Whales, perhaps 60 different individuals by the end of the week (the best ever for any trip to date?). In 2004 there were fewer Blues around in late August and I told my group we had a good chance over the week but not to ’expect’ them. 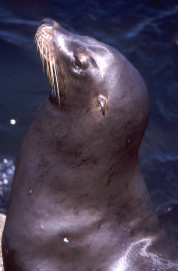 On our 2nd trip we set off into misty seas, seeing California Sea Lions, Harbour Seals and Sea Otter in the harbour. Richard was excited since the DTW trips are one of the few occasions each year he gets out for a full day to really do some exploring.

At first things were fairly quiet apart from seeing a few sunfish (Mola mola) in the calm conditions. Then, at the edge of the canyon, we had a small group of Dall’s Porpoises, then some Humpback Whales. As we continued on our way we came across a huge pod of 1000+ Risso’s Dolphins and over the next hour we encountered lots of them as well as 100’s of porpoising Northern Right Whale Dolphins. In the calm conditions we had more sunfish, a Blue Shark, a Northern Elephant Seal - and more humpbacks

We finally approached the area close to Monterey Bay Weather Buoy. Richard hadn’t been here for almost a year and Peggy had never been here - even though she’s been helping Richard and Nancy as a photographer for the Orca/Grey Whale encounters for a number of years. Illustrating how special the DTW trips are. 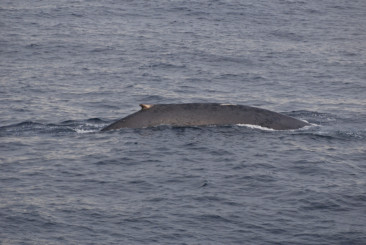 Then Peggy spotted something just breaking the surface … a Blue Whale! In the end we were close enough to hear the very deep sounding blow - and saw the flukes been raised high in the air for one deep dive. Then, to everyone’s surprise two Minke Whales appeared and swam right under the boat, showing the white mittens on the flippers. Next a large whale suddenly appeared with a large fin, a Fin Whale! Then a larger Blue Whale appeared and at one point we had Fin, Blue, Minke and Humpback Whales around us - and an elusive Northern Fur Seal. Finally as we headed back to Monterey we were joined by hundred of Pacific White-sided Dolphins and our thirteenth marine mammal of the day - and all good encounters!

Over the next few days with the flexibility of the trips we checked out different areas, including the shoreline for surfing Bottle-nosed Dolphins. We also built up less predictable encounters, including a small Grey Whale (unusual at this time of the year) and two pods of Orcas, including one pod feeding on a seal kill.

By the end of the week we had seen seventeen species of marine mammal and with a stop over at Ano Nuevo on the way to the airport to see Northern Elephant Seals we also saw Steller’s Sea Lion and the 18th marine mammal of the trip. Monterey (along with places like Baja California) ranks as one of the best places to get a really good marine mammal list - but how many trips can boast of seeing 18 species in one week!

Although 2004 was exceptional most California Blues trips get a good range of marine mammals with some stunning encounters during the week. Whale watching anywhere in the world cannot get much better than this - the reason Monterey is so special.