In Search of the Frozen Realm 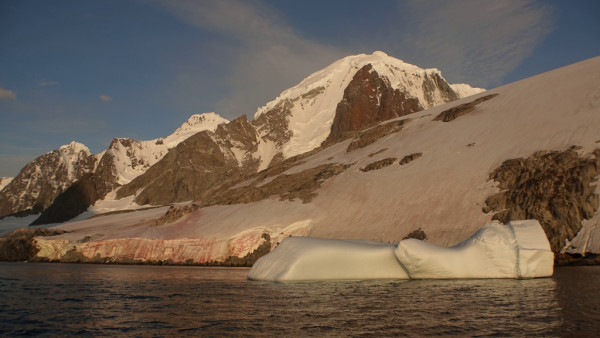 For most people, the idea of travelling to Antarctica is an adventure of a lifetime - but in their dreams. Very expensive cruises on a handful of vessels ruled out most people, unless you had lots of money, or could go as a visiting scientist or explorer. Well, the break up of the Soviet Union changed all that. With polar research vessels with experienced crews sitting idle, the idea was formed of using the vessels to do ’expedition cruises’ to polar regions. Today a wide range of ships and companies offer cruises to the ’white continent’.

It is a 'trip of lifetime’ in the truest sense of the word (a phrase used for many locations around the world that you could get to several occasions if you’re determined.). A trip will still cost a lot of money, but it is target to save towards, rather than something, in the past, was way beyond reach. There are retired people on these cruises but many others as well - couples in their 50’s whose kids have left home and they have more freedom to explore, young couples before they settle down, singles, college kids, and even back packers who have made the effort not to miss this trip when they had the chance with some last minute offers.

I first had the chance to go to Antarctica as one of the ship’s staff in 1995 on the Professor Multanovsky (one of the original ships from the Soviet fleet) and, since Christmas 2004, I have had the chance to regularly go back as the ship’s naturalist and ornithologist to peninsula and South Georgia. Recently it has been on the MS Expedition with Gadventures that has to have one of the best mudrooms to keep outdoor gear dry! Gadventures also attracts a range of ages and a broad range of nationalities, often creating a party atmosphere onboard.

Point of departure for most is Ushuaia

in Tierra del Fuego at the tip of South America. Situated on the Beagle Channel and it is known as the most southerly city in the World. During the southern winter it is a ski resort. During the summer months (mid November to March) it is the hub for Antarctic cruises.

Most passengers arrive the day before and spend the morning around Ushuaia or exploring the nearby Tierra del Fuego National Park. With the quick turn around most cruise ships off load one group of passengers in the morning before the next group comes aboard in the afternoon for what will often be a 10 to 12 day cruise. It means several ships (never say boat, you’ll get in trouble with captain!) are usually tied up along the dock for a few hours between cruises to the peninsula.

The Antarctic Peninsula has to the best destination on the white continent to visit by ship. The passage from Tierra del Fuego is the shortest crossing and the peninsula and South Shetlands are the first areas of Antarctica to become free of sea ice each spring, attracting a wealth of wildlife. And the scenery is fantastic! Some cruises even add South Georgia and the Falklands to the tour. 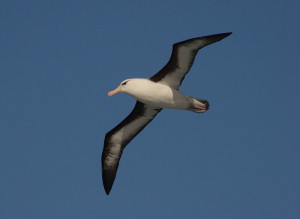 After arriving passengers have checked out their cabin there’s the welcome cocktail in the main lounge and the briefing about the ship’s routine. The ship then sets sail, departure from Ushuaia being a special moment. After all, many have saved long and hard for this occasion. The ship then sets sails along the sheltered Beagle Channel through some of the most stunning scenery in South America. As the ornithologist I point out birds that will be seen for much of the crossing, like the Black-browed Albatross, plus birds we will only see close to South America, such as the Megallanic Penguin. We also have the emergency drill, the first dinner, and the chance to watch sunset late in the evening.

We then set out into the Southern Ocean and the infamous Drake’s Passage. The seas can be very rough but they can also be surprisingly calm as well. Typically there is a swell and on the first morning ’at sea’ quite a few don’t come to breakfast. However, most get their sea legs during the first day. As the ornithologist I look out for seabirds (and dolphins and whales if we are lucky), give lectures (quite novel with the ship rolling from side to side!) and mingle with the passengers at meal times. 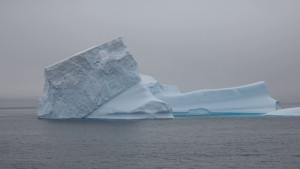 Heading south the ship gets close to the Antarctic Convergence where the sea temperate rapidly drops as we head into Antarctic waters - and a sweep stake is on for the time the first iceberg is sighted. It may be the first day at sea - or well into the next day - but it is such a special moment. No one forgets their first iceberg - and it means Antarctica is near! People go onto to see countless icebergs but never tire of the amazing array of shapes, sizes ands colours. And they never forget that first one!

The sighting of Antarctica is another highlight - to see the ice capped mountains of the South Shetlands with lots of Pintado Petrels around the ship - knowing you’ve arrived! If you are lucky, on the afternoon of the second full day at sea, you might get ashore at a location in the South Shetlands (but never expect this, bad weather on a crossing may mean 2 full days at sea, or the weather suddenly changes on arrival). If you do get ashore, it will be an unforgettable moment, that first step ashore in Antarctica! 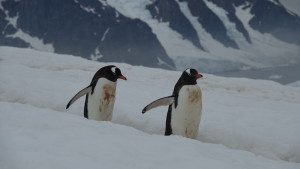 in Zodiacs and it seems like the penguins on the beach are waiting for you! You are told to keep 5m away from penguins but they are more than welcome to come up to you and many are overwhelmed by the close encounters they have with the inquisitive penguins. There is also the chance to see laid back and fat Weddell Seals, belching Elephant Seals and noisy Antarctic Fur seals. With the surrounding scenery and all the ice, it surpasses all expectations, the remains of whale jawbones and seal carcasses on the beach adding to the surreal atmosphere.

The routine for the rest of the time in Antarctica is a series of shore excursions and also simply to enjoy the stunning scenery as the ship sails along - and watching for a Crabeater Seal on an ice floe, or even spotting a whale if you are lucky. The weather is fickle and can change an itinerary, so cruise ships never like to ’state’ where they are going. The expedition leader does have an overall plan and is in contact with other vessels to get the latest on wind and ice conditions.

The South Shetlands were given the name since they are the same latitude south as the Shetlands are north. Along the peninsula itself the furthest south you are likely to get is the Lemaire Channel. Even then, it is outside the Antarctic Circle, at a similar latitude to central Iceland. It can get cold and windy (especially on the crossing) so it is good to come prepared with the relevant clothing. But it is the Antarctic summer and it can be surprisingly mild. Apart from Wellington boots or similar footwear (to get in and out of the Zodiacs) and waterproof overtrousers (you can get splashed on the Zodiacs) sunblock is important since it can get quite sunny and the Ozone hole is still there each summer, if slowly decreasing. On the shore excursions you can also get quite warm. Overall, just like Iceland in the summer, it can be cold, but it can also be surprisingly mild considering you are in Antarctica! So dress in layers and have a good warm jacket (and red jackets are best for photographs!)

The South Shetlands are great to check out the wealth of wildlife and scenery and most cruises visit the South Shetlands on arrival in Antarctica, and on departure. Encounters with the penguins (Adelie, Chinstrap and Gentoo); observing seals; visiting Antarctic bases; and being astounded by the mountains, glaciers and icebergs. According to the time of year you can watch penguins build nests; taking turns to brood eggs or chicks; and late in the season having inquisitive chicks coming right up and even clambering all over you.

Deception Island is one of the favourite destinations - a volcano you can sail right into through Neptune’s bellows (it can get very windy) and sealers’ descriptions from the 1820’s gave Jules Verne the inspiration for the lair of Captain Nemo and the Nautilus. With the rusting remains of the old whaling station it does feel like you have stepped back in time and with the volcanic activity the black sands can get quite warm. It means you’ll have the chance (weather permitting!) to go for a swim - in Antarctica! From the South Shetland the ship cross the Bransfield Strait (often great for Humpback Whales) to the Antarctic Peninsula itself. At the tip of the peninsula is the Antarctic Sound. Aptly nicknamed ’iceberg alley’ it can be full of tabular icebergs that have drifted in from the Weddell Sea and some years it can still be blocked off for much of the ’summer’.

Nearby there is Paulet Island with the biggest Adelie Penguin colony in the peninsula and the hut where Larsen was forced to winter after the Antarctic (the vessel after which the sound is named) was crushed by ice on Nordenskjold’s expedition of 1901 to 1903. This story of survival matches Shackleton’s expedition, where the Endurance was trapped in the ice for months in the Weddell Sea before being crushed. With all the ice it can be difficult  to get through the Antarctic Sound and most cruise choose to sail along the ’outer’ coast of the peninsula itself. This is a chance to see amazing scenery up close with snow-capped mountains along the Neumayer Channel, narrow straits like the Errera and Lemaire Channels, aptly named places like Paradise Bay with huge glaciers, and to step ashore on the continent itself.

Another highlight is to visit Port Lockroy. Site of the first British base on the peninsula, it is surrounded by a Gentoo Penguin colony, some nesting right up by the door of what is now a Museum. Restored to how it looked in the late 1940’s and 50’s there’s clothing and tins of food and even a gramophone playing tunes of the period like George Formby. There is also a post office where you can send the ’ultimate’ postcard back home - though it will take quite a time to get there!

For me, one of the ultimate experiences is to go on a Zodiac cruise to enjoy the scenery, get close to a Leopard Seal on an ice floe, have a Minke Whale swimming under the boat, or to switch off the engine and listen to the sound of cracking ice! 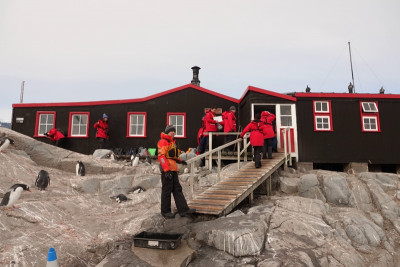 Finally the ship sets sail back across the Southern Ocean once more, and by the time Cape Horn is in sight passengers really do feel like they have been on an epic voyage of a lifetime! You will end up taking lots of pictures with your digital camera, so do think of finding a way to label the pictures for each landing (otherwise it can be rather confusing remebering at a later date!) and even to download images onto a computer or a similar device.  And also invest in a waterproof bag for you cameraYou’ll take lots of pictures, and have even more memories!